Friends for 50 Years, When Roommates are More Like Family 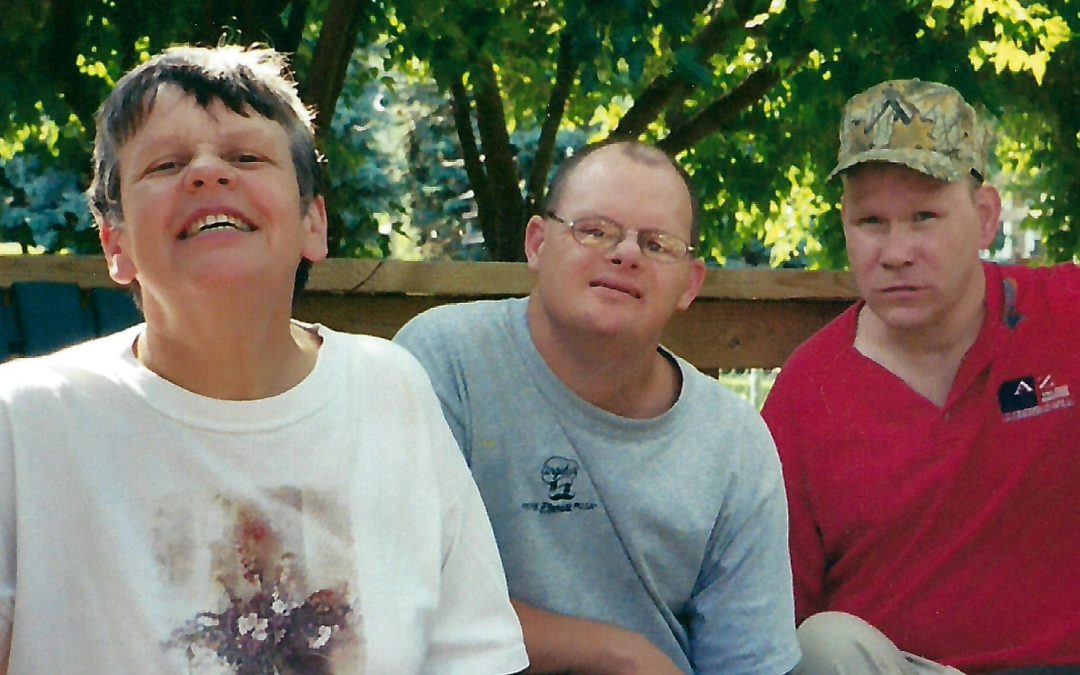 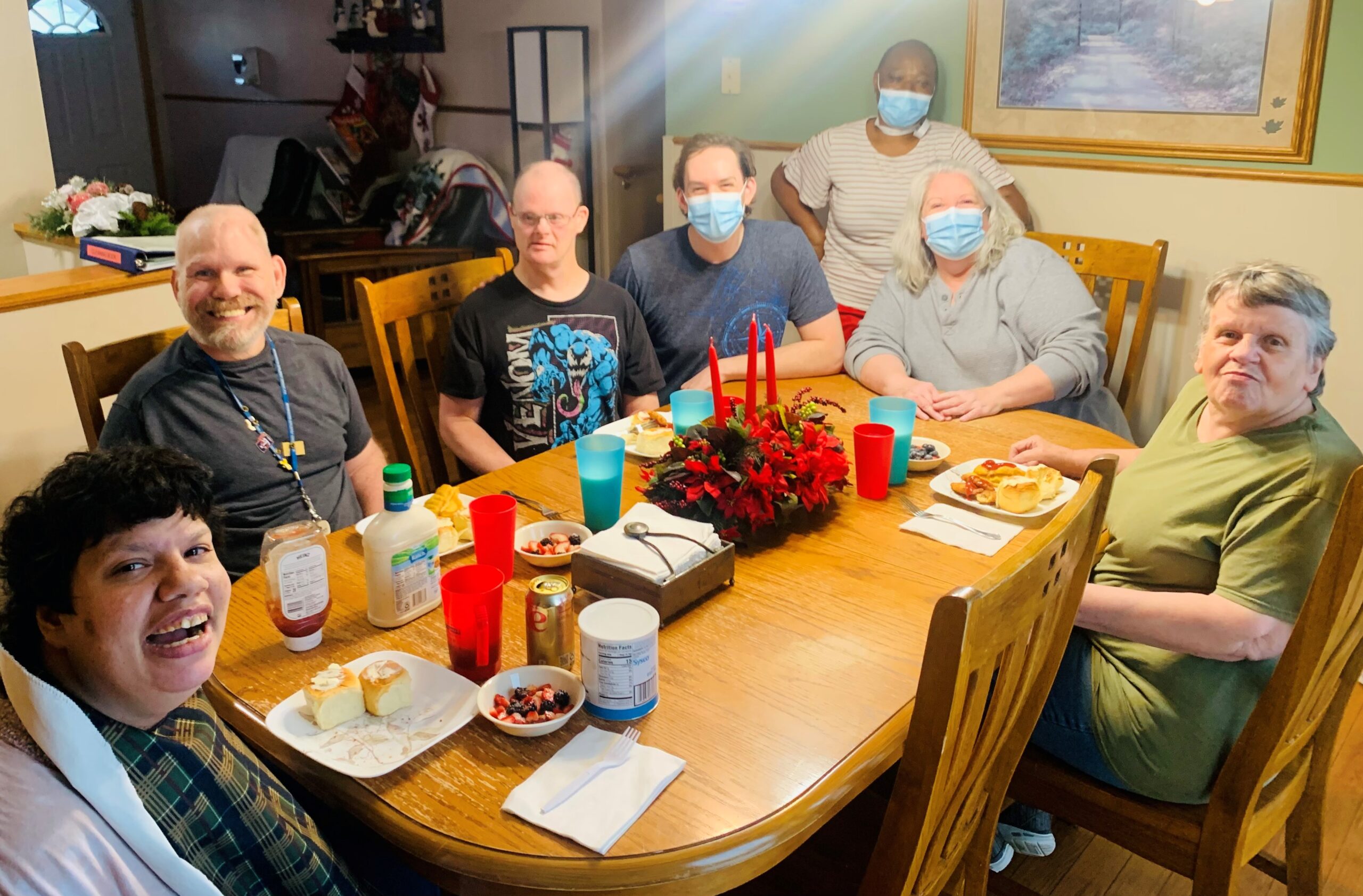 It may seem hard to believe, but did you know Living Well Disability Services has been around almost 50 years? When you meet the crew at our West Emerson house it soon becomes clear, because three of the people served there have been with us from the beginning. First opened in 1972 as Dakota’s Children, with 45 permanent beds and three respite beds for kids with disabilities, Living Well expanded reach over the decades and now has 37 group homes in the Twin Cities Metro. Of the more than 400 children who came to live or stay at the original Marie Avenue location between 1973 and 2001, 38 still live with Living Well—including Mike, Tom and Marsha, who now live together at West Emerson.

The beautiful thing about our houses is that they all have their own personalities to match the energy of the people who live there. To get to know them is the best way to understand what makes Living Well so wonderful.

Marsha with Tom and Mike

Marsha, at 70 is the oldest person at the house. She was born a healthy baby but developed a high fever as a toddler that would change the trajectory of her development. Her 106 fever broke after a few days and all seemed well, but as she aged it was discovered the fever was too high for too long, and caused delays. Marsha was fortunate to live at home for a long time, but eventually went to an institution as was common in the 1970s. After a short time there, her family knew they needed something better. They soon found Dakota’s Children, which offered a new model, one smaller than an institution with more personal care and less people in one place. Marsha came to the original location in 1972 and moved over to West Emerson when it first opened back in 1998. She is a puzzle aficionado and enjoys Legos. Marsha spends holidays with her brother and sister, likes going out for coffee, and has had the same boyfriend since her 20s. So, if you need dating tips, she is your gal.

Mike with one of his guitars

Mike is one of the very first people to call Living Well home. Prior to coming to Dakota’s Children at age 10, he lived with Betsy Pate, whose parents were founders of the organization and instrumental in creating the new version of care that came to be Living Well. Mike is now 60 years old and a huge lover of music who plays several instruments. He has a harmonica, banjo, ukulele, accordion, and two guitars, all of which he loves to play. Like Marsha, he was born healthy, and lived a normal life until the age of four when he was involved in an automobile accident that left him disabled. His injuries damaged one side of his body and left him with brain damage as well. His family is very involved in his care and has visited almost weekly since he came to live at Dakota’s Children almost 50 years ago.

Mike in a Dakota’s Children brochure

His brother, Steve Polski, says, “The amazing thing about Mike is that he never has a bad day, He is always happy, always smiling and always looking at the bright side.” Adding, “Mike is happy all the time, he is a miracle and an inspiration. He does not have an enemy in this world.” His personality is so bright, Mike’s happy go lucky personality was featured in a company brochure back in the 80s. Mike played hockey on a league for years, enjoys arts and crafts and beading. He also likes hanging with friends and enjoying an occasional non-alcoholic beer with his buddy, Tom. When asked what makes Living Well special, his brother says Living Well was able to give Mike a true life, one that their parents would not have been able to provide in way of activities, learning, and exposure to work.  He said Living Well gives peace of mind and total trust. 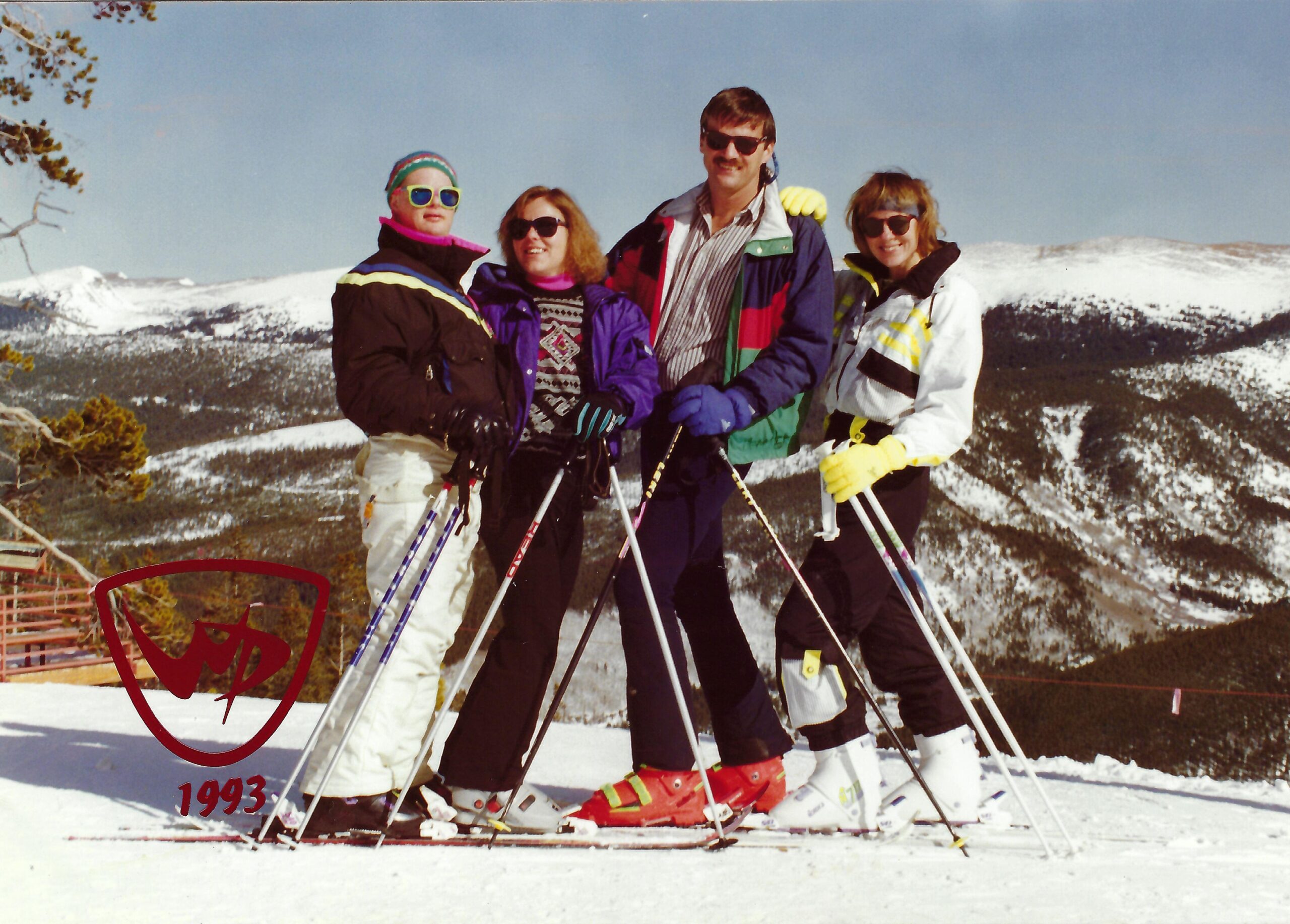 Tom skiing with family in 1993

Speaking of Tom, he is a 55-year-old party animal who goes by the nickname Bomber. Ok, maybe not a party animal, but definitely someone who prefers a trip to Treasure Island for some dancing and fun over a quiet night in. Bomber truly loves a good sports night or a casino trip, and a cold beer. He has a great relationship with his brother and sister and was able to spend the first five years of his life in the family home. He is not a huge fan of group activities and much prefers one on one time with the staff, which worked in his favor when day programs started to close at the beginning of Covid. To his benefit, Program Manager, Mary White, was able to create activity stations in the home back in March of 2020, allowing for things to do safely at home. She created craft stations, music areas and lounge spaces, which were perfect for Tom, who prefers quieter time when at home. 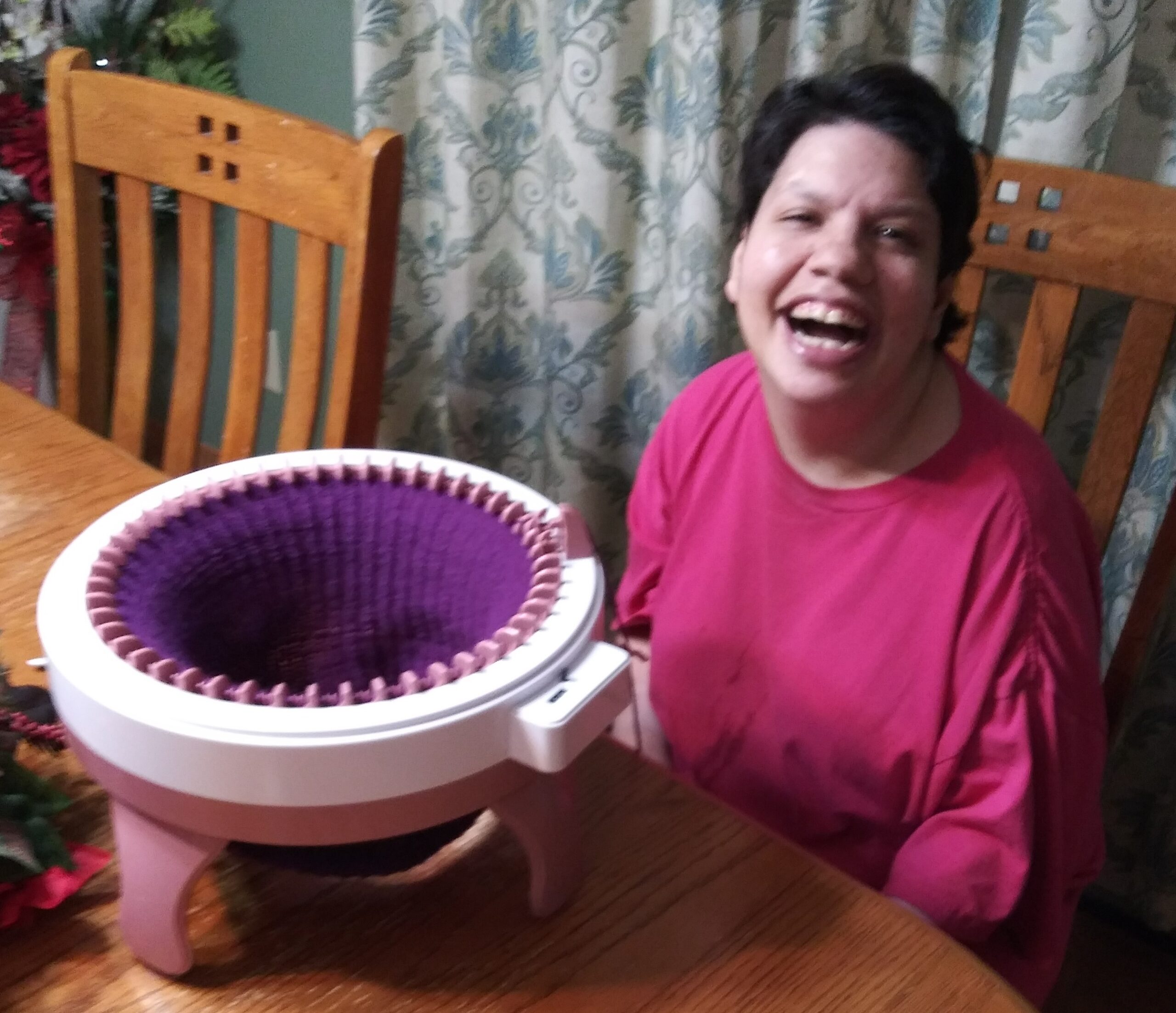 Nichole, AKA Nicky, with her knitting loom

Nichole is the baby of the group, at the young age of 39. She first came to Living Well in 2009 and has been with the crew at the West Emerson home ever since. Nichole was born with a disability, needing care throughout her life. Without family support, she arrived with some trust issues but has built familial relationships with her housemates and staff. She communicates with signs and by using a tablet. White, who has been with Living Well for 13 years, has built a great bond with Nichole and says they often have conversations simply with gestures and a few signs. Nichole loves knitting with a machine, working on a rubber band loom, spending time on her tablet playing games and researching interesting stuff, listening to music, and watching movies. What is her favorite movie? Anything scary, which White says with laugh, makes movie night interesting. Seems many staff have gone to the movies with their hands in front of their faces. Nichole also goes by Nicky, and like Marsha has a boyfriend. Nicky and her beau will be celebrating Valentine’s Day with a nice dinner out. Our staff is lucky, can there be a better job than driving a couple for a fun holiday dinner? Or movie nights out? Perhaps the scary movies should be left for those with similar interests but providing opportunities to get out and do the things they love is what makes living in a supportive home special.

Over the years this foursome has bonded and at this point have been together so long they are more like brothers and sisters. And just like siblings there is bickering, laughter, and so much love. And the family vibe extends to staff as well. Assistant Program Manager, Brace Gotshalk, says, “To me this isn’t a job, I’ve made bonds and ties with these guys that make them feel like family. I connect with their siblings and parents. They are not just people, or a way to collect a paycheck, they are family.”

Mary and Mike enjoying dinner out

Mary White adds a bit on the importance of the connections and how much she has learned in her position. “When I first started in direct care, I had a specific idea of what it was like to work with someone with a disability. I didn’t take into consideration was how little I actually knew, and what they would teach me,” she says. The crew at West Emerson taught White patience, to see someone in a much deeper way, to not take everything so seriously, and the importance of sometimes just going with the flow. Both Gotshalk and White agree that the work is important, but the bonds are what keep them learning new things every day.

And this is why all of us at Living Well do what we do and why we have been passionate about the mission and caring for others for nearly 50 years. We adore the people we serve and take great pride in offering them opportunities to live rich full lives. When the world sees people out in community living their best lives, we have succeeded in showing that we all come with varied interested and desires, and we are all worthy of being seen.