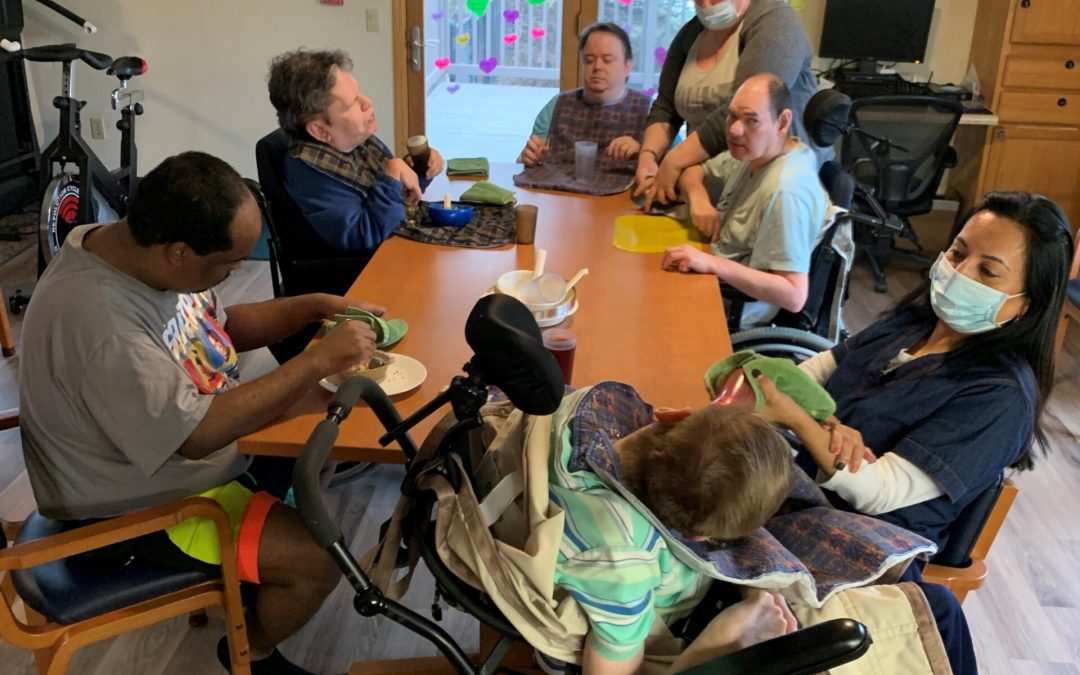 The beauty of friends and family is that they come with so many different personalities it can be hard to keep up. Same goes for the houses at Living Well. Each home has a distinct personally that is part of the culture and creativity of the home. You already met the amazing people at West Emerson, where three of the four have been together since the beginning; and Southcrest where the home is owned by families versus Living well; and of course, Thompson which boasts a house cat and a respite room. Today we introduce one of Living Well’s bachelor pads. At this house there is a peaceful and chill vibe, where everyone is happy to be together but not necessarily needing to be together all the time. 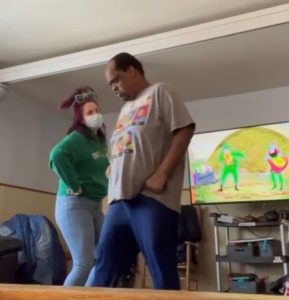 Let’s start by introducing Jerome. He is 37 years old and by far and away the best dancer you will ever meet. He loves to bust a few moves with staff and loves music! Once a week he will even go to another Living Well house where he gets to dance with a new crew and enjoy new tunes. Jerome also likes to go out to eat with staff, and his favorite restaurant is Burger Time in West St. Paul. While there he loves to order burgers and ice cream, with a fondness for Reece’s and Cookie Dough. On the way home he likes to swing by his old schools to bring back memories of his time there. Jerome has a list of six schools in St. Paul and picks his favorite for the week, then takes a trip down memory lane (he tends to favor Bridgeview and Como Park School). He also brings lunch to his mom once a week, where he gets to spend time with her and enjoy a bite. He laughs a lot, uses his own version of sign to communicate and enjoys time with his family. Jerome video chats with his mother throughout the day and will call her after breakfast and lunch and do evening prayers after dinner.

H smiling for the camera.

H. moved into Mary Adele in 2005 and is 40 years old. He can appear quiet at first, but this wallflower pays close attention to what is going on around him and the home. He may prefer to be on the sidelines but will often cackle with laughter along with the conversation. He likes the sensory room, and finds the lite panel interesting, as well as the Nano leaf wall. He enjoys the calming space in there, and really appreciates the quiet alone time. H. is a bit of a night owl and can often be found watching a movie before bed, with his favorites being scary movies or action flicks. And since he loves to stay up late, one of his favorite things to do is—nap. Which we can all attest is good for the soul, especially during these rainy spring days! He uses a wheelchair and needs a little extra help with meals but fits right in with the rest of the guys here. He has a very involved guardian who happens to have been a DSP and was a nurse at a facility.

Kevin is 50 years old and moved in when the house opened in 2000. He came over from the original Marie Ave. location, which he moved to when he was a young man. He is the music man and is perfectly content listening to his tunes as often as possible. He is a big fan of the 80s and loves pop music. Heart, Michael Jackson and the Go-Go’s are at the top of his list of favorites. He loves music so much that when his music stops, he immediately ask for more to be played. At lunch they often have to turn it off or he will get lost in the songs and daydream without taking a bite. He had some time away from his Day Program but is returning this month, which will provide opportunities for socialization. Kevin has been practicing his numbers and can even count to 15 — in Spanish. Kevin is part Native American and enjoys attending powwows, having been to one at Treasure Island, as well as yearly events in Mendota. For food he enjoys sweets and pasta, and he is a slow eater allowing him to savor every bite. He loves playing catch and he has a great arm. He also loves it when the basketball hoop is put up on the deck!

M. has been with Living Well since the Marie Avenue days and moved to Mary Adele with Kevin back in 2000 when it opened. He is remarkably adept at navigating the house by touch. He walks very slowly through the house, and knows words for direction. When out and about he has staff assist him. He is helped by sensory experiences and likes to have sensory brushing, where a brush is gently rubbed on the skin. This helps soothe him when agitated. He also really enjoys playing with bubble wrap and fidget spinners. M. is the kind of guy who just really likes to keep busy and is always moving his body—he even does 20 minutes twice a day on the exercise bike. He has a smart speaker and listens to audio books, and sometimes listens to a book on the TV room swing. He is a good eater and loves meat and potatoes, as well as pizza and pasta. He is not however a fan of zucchini, which is good to know because when M. is not a fan, his food can end up on the floor. He talks to his mom a lot and occasionally his brother, too.

Richard in his stander.

Richard is 54 years old and has been here since the beginning. Richard, Kevin and Mike were all originals, maybe even living in the same wing in the original locations. He is very friendly but does not like to be fussed over, which means shaving can be a bit stressful. But just as soon as he is clean shaven his laughing personality comes out and he is happy again. He is a music buff like his buddy Kevin, and enjoys Michael Jackson and 80s music. He also enjoys old movies and TV, like Bonanza and Gunsmoke, which he often watches while in his stander. What’s a stander? A stander helps him keep strength in his legs and allows him to stand for 45 minutes at a time to keep the muscle tone that he has. He is also an expert at rolling himself around the house. At mealtime Richard enjoys pasta and meat and potato dishes. He needs his food be pureed, which helps with chewing and digestion. This means he can still enjoy all the beautiful flavors but the pureeing makes it safer to enjoy certain foods. His day program closed during Covid, but he is on the wait list for the Apple valley Lifeworks location.

Corey chillin’ on the couch.

Corey is 52 years old and is also a Marie Avenue original. His family is very involved and come regularly to visit him at his day program in Woodbury. They also come to the house and spend quality time on the deck or in the sensory room. He is a friendly guy and very boisterous. He often yells, not to be aggressive but just to be loud—he likes being heard. He is ALWAYS on the move and loves to shake hands. He uses the stander five days a week and loves to sit on the deck in the summer to watch the airplanes. Corey is a fan of westerns and polka music and is also a huge baseball fan who loves watching baseball and has been to a few games. When it comes to food, he does not like corn or peas, but enjoys pasta and burgers, and his favorite treat is a Three Musketeer bar. Corey is very animated and laughs a lot. His personality shines on his face, but also gives it away when he is in pain or is upset. Being that he does not speak, his ability to communicate with is expressions is of great benefit to him and the staff who help him at the house. He communicates best by gazing at what he wants.

Zach Emmons, Program Manager at Mary Adele, says the house is great and that everyone genuinely appreciates each other. Kevin, M. , Richard and Corey have been together since the very early days at our original location and are in the groundbreaking photo for this house. The six people who call Mary Adele home are happy to have such great roommates, but instead of being best friends they operate more like family. They are comfortable, happy in each other’s presence and get along great, but do not look to each other for constant companionship. This group of guys have some similar likes and dislikes and have things that make them shine that are just for themselves. Emmons says they all just really get along and work well together. There is not a lot of drama or big personalities, and they just make it work seamlessly. Emmons adds, “I am fortunate to have a great team and great relationships with the families, guardians and guys.”

He is super grateful to the staff for working so hard to keep everyone happy and healthy and simply enjoys the energy of the home. His staff have been there for a long time, and he is grateful for Nicole, Jackie, Akoele, June, Nike, Trey, Elizabeth and Yetunde for showing up daily to ease the routines and make the lives of Jerome, H. Kevin, M., Richard and Corey easier and more fulfilling.

Emmons invites you to share the employment link with friends and family. All of our homes are understaffed, and we are looking for more staff to add to our teams. www.livingwell.org