The Crew at Cope Missed the Fair, so They Had One at Home! 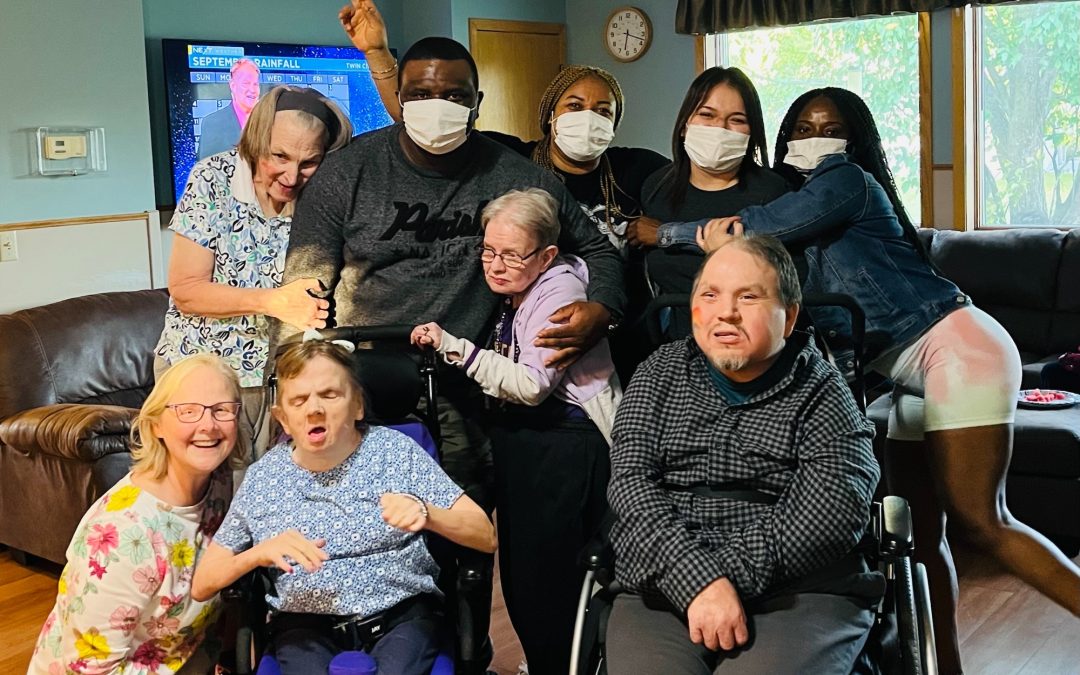 Ah, Minnesota. We love your weather and having four seasons of fun. We love your beautiful lakes and the incredible parks. We love the people we meet and the places we can visit. But above all, we sure do LOVE the State Fair. The glorious Great Minnesota Get Together! The food, the sights, the games, the music… We could go on, but with the attendance numbers coming in over 1.8 million this year—it seems most people understand what we are saying.

While some houses made it to the fair and had a BLAST, the crew at Cope was bummed to miss out. They had the trip planned and knew exactly what they wanted to do, but as we all learned these past few years, sometimes plans get put on hold. So, with fun in mind, the newest Program Manager, Cynthia Hinojosa, arranged the fair to come to the house! Cynthia and the team at Cope contacted family and guardians and in no time the celebration was planned. There was a cotton candy machine donated by one family member, and others made plans to attend. Sweet Martha’s Cookies were bought at the store and baked at home. A volunteer named Grace, a student at UMN who is doing her Psychology Capstone Project volunteering at Living Well brought her puppy Melvin, and while not farm animal he was a huge hit with his sweet demeanor and wet nose. And Comfort Osaro, who celebrated her twenty-first anniversary with Living Well this week, and Direct Support Professional, Beity Eghenure, lead the charge by dancing to African music.

Everyone had a blast, and for a couple hours the fair was indeed at Cope! Cynthia even made a beautiful video that captured the joy everyone felt by spending a few hours laughing and having fun together. Like friends and family, they have shared experiences and find beauty in big and little moments. 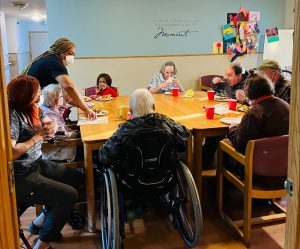 So, who was there? The staff, people served, and a few family members joined the fun. Here is a little bit about the people who call Cope home, so you can learn more about what makes the house special. 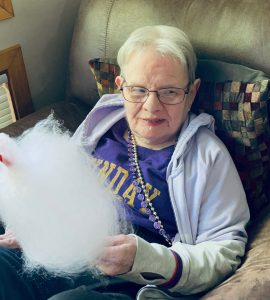 Let’s start with Patty. Patty loves to have fun and loves the Vikings. How much does she love the Vikings? So much that she doesn’t wear anything besides purple. She is playful and funny and has an easy laugh. Patty also enjoys the Price is Right and watches it every day at 10 AM. She loves music and is a huge fan of Elvis and the Beatles. Perhaps the cutest thing about Patty is that when she gets excited her eyes spark up. She has a very involved guardian who even donated the cotton candy machine for the party! Patty is a little ray of sunshine at Cope.

JoJo with her sister, and Melvin.

Mary Jo has a super active family who also donated lots of supplies for the fair party. Her sister Therese visits weekly and helps with her OT and PT and is her biggest advocate. She even went to the fair and picked up items for the party. Therese adores her sister but also cares for all the people served and will donate art items and activities for all. Mary Jo likes to be included in things. She is blind and nonverbal, which means that the tone of your voice can induce a smile. Communication can be hard, but when approached with descriptive language she lights up. When you tell her all kinds of things and use hand over hand movement to lead her to objects she thrives. Her sister loves to sing to her descriptions of that they are doing, “We are washing our hands…” Communication has a lot to do with tone which is very important, and playfulness in the voice is helpful. Her team and family know this, which makes communication easier. She also enjoys music, and like her family she loves food. When she eats, she will go “mmmmmm” when she tastes something really delicious. 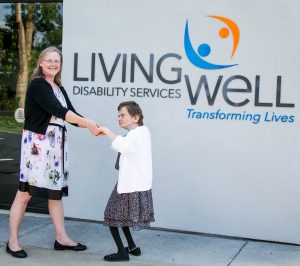 Sisters with the logo they inspired!

Mary Jo and her sister are also an indelible part of Living Well, as the duo are the inspiration of the hugging arms part of our logo. Their brother Matthew, who is also very involved, helped with the rebranding back in 2009. When he saw a photo of them, he created the art that now is our logo.

Kay with her shiny new iPad.

Up next is Kay, who always wears a green hat, and has a very soft voice and super kind vibes. She is also a bit of a trickster who found a way to sneak a company iPad with her to her day program. And after getting her own, found a link to a Ticketmaster event and asked to see The Piano Guys, who play famous covers on piano—in Detroit. Cynthia says she is so stinking funny and when she starts dancing, you just don’t know where she comes up with her moves. Kay is also naturally witty and calls Beatrice, Jackie Jackie, and Ibrahim, Steel. She also loves baths and can be a bit forgetful, which one-time left Cynthia soaked when the fancy tub with side doors opened. Kay gave her a wink and said, oh yeah, sometimes the door can be loose. Cynthia was new at the time and ended up wearing a swimsuit as her clothes dried in the dryer. Kay also loves food and still managed to lose a ton of weight, because of the MY 25 plans which have helped her make better choices. After adopting the program two years ago Kay lost close to 80 pounds. She also likes to be near people and will work side by side with staff. As for that Piano Guy show, Cynthia found out they are playing in town, so Kay, David and Patty will be going to check them out live.

Leigh and Cynthia on a joyride.

Leigh loves letters. Not writing letters, but tracing big letters—and her absolute favs are Q, E ad G. She will draw big block letters and color them in and loves it when staff help her with this. When she watches staff draw them, she puts her hands on her face and is delighted to see them enjoy the letters, too. Leigh also likes van rides, not so much the destination but the drive and taking in the sights. Kitties and puppies are also favorites, and she has a very gentle manner and touch, which makes her a perfect animal lover. Her mom is very sweet and makes sure Leigh is well taken care of. Every two weeks someone comes and does her nails at the house and her mom sends her clothes and care packages. A real treat is when she goes with her mommy and daddy to McDonalds to get a coke. 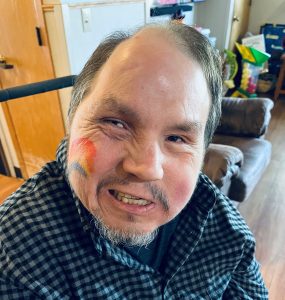 David with some face paint.

David’s guardian is also very supportive and was planning to come to the fair but had a last minute schedule change. David likes to travel and recently went to Disney with staff member, Barnetta. David is very sweet and will always ask about other people’s days. He likes to Karaoke and has a machine at the house. David also loves dancing to African music and refers to the song in the video with, “that’s my song!” He was introduced to the music by staff and fell in love with it. He also watched Encanto recently and loves that soundtrack. At the end of the movie he clapped saying that was great. His favorite things are people and music. He simply loves to be socializing and with people.

John and his new hat!

John has been with Living Well a long time, and like Leigh enjoys van rides. He is a great advocate for himself and while blind and nonverbal can lead staff to the kitchen to use his hands to indicate what he is wanting. He is very chill and likes music and food, with McDonalds being a special treat that he enjoys on occasion. John also really loves hats, and they way they feel on his head. The staff made the fair experience special for him by getting him a new hat to enjoy! But no matter how much he loves hats, food or music, there is one thing he loves even more. John loves to sleep. We hear you, buddy! With cool nights on the horizon, it’s a good guess you are not alone in that!

In addition to amazing people served, Cope also has incredible staff. As mentioned, Comfort has been with Living Well for 21 years, and Assistant Program Manager, Amy Martins, has been here for 24 years! That kind of longevity is incredible, and we are so lucky to have people stick around for decades. Other members of the team include Assistant Program Manager, Ibrahim who has been with Living Well almost six years and Certified Nursing Assistant, Bondu , who is in her second year. And of course, the amazing Direct support professionals—Ola and Beatrice, both here almost seven years. Godlove, closing in on six years. Jackson and Abdulai, both at four and a half years. And Beity and Islamiyat, both on staff over three years.

Cynthia is impressed by the staff and feels grateful to be a part of Living Well. She says, “For them is not about the money but about the people and providing exceptional care.” Adding, “They are not just coworkers but more like a second family.” Just this week when someone called in sick, Ibrahim, who often works 50+ hours a week and was off, moved mountains to make sure he could come during the busiest time and help out. “That kind of dedication makes my job not only enjoyable, but it inspires me to give my utmost best to be a good leader, a strong advocate, and a kind soul not only to our people served but to people out in this world. They are all inspiring,” Cynthia says with gratitude.

Please watch the video of the Fair at Home here, you will smile and just might even dance! And to our dedicated staff, we say THANK YOU for being beautiful caregivers!